Apple’s newest addition to its long-running phone franchise is the iPhone 8 and the iPhone 8 Plus.  However, instead of settling with the expected two releases, Apple will be realising an additional phone to mark the 10th anniversary of the phone; the iPhone X.  But is this phone worth buying?  Is it an innovative leap into the future of phones, or just an ode to the past?  We’ve compared the iPhone 8 vs iPhone X.  Read on to find out which one is technically better and which one might be better for you.

The first major difference between the iPhone X and the iPhone 8 is that the fingerprint sensor is going to be replaced by facial recognition.  This allows the user to open their phone by simply swiping up and looking at it.  Therefore, removing the physical home button all together.  Another new feature that Apple has added for both the iPhone X and for the 8 is wireless charging.  Now instead of looking around for the cable, you can just place your phone down on top of the wireless charging dock.  This comes as standard and alongside the usual splash, water and dust resistance.

The iPhone X and the iPhone 8 Plus share similar battery life (the 8 Plus in fact has a slightly better one).  The iPhone 8, however, has considerably less battery life when it comes to talk time and audio playback.  Either way, this is more than enough for a day of usage; additionally, Apple claims the devices can go from 0% to 50% in 30 minutes (if you are using the Apple USB-C charge and Lighting cable, which are sold separately).

In terms of screen size, the iPhone x boasts the largest screen size while actually being smaller than the 8 Plus.  This is possible due to the X completely covering the whole phone with the screen.  Letting the 5.8” screen cover almost the whole phone.  While the iPhone 8 Plus only has a 5.5” screen and yet it is much bigger than the iPhone X.  This may be a considered a problem with the Plus edition to iPhones as some people think they are too big. 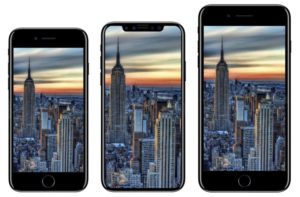 A duel 12-megapixel camera is the back facing camera on the X and the 8 Plus.  This allows for beautiful photography and also detailed distant photos (for example, taking photos of notes on the board in a class or lecture).  The iPhone 8 only has a single 12-megapixel camera but this still is able to create amazing stills.  All three phones have the same 7-megapixel front-facing camera.  Which lets you take all the selfies you want in exceptional crisp detail; then you can upload them to whatever social media platform you choose.  As well as all of this, 4K video capture comes standard on all three devices. 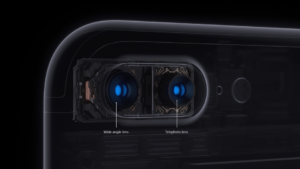 The three new releases from Apple will all run on the same processor; an A11 Bionic Chip and an M11 Motion Coprocessor.  This is the one-up version from last year’s models and basically means it will run faster.  As for the storage, Apple has scrapped that 32GB version and the iPhone X, iPhone 8 and iPhone 8 Plus will only be available in 64GB and 256GB models.  This is a good thing in terms of having more memory but possibly a bad thing as it could lead to a larger starting price for the phones.

This year is the first year that the iPhone’s price will match that of the price in the UK.  The iPhone X starting price is $999 in the USA and £999 in the UK (over £1000 for the 256GB).  Apple claims this is because of the exchange rates, distribution costs and taxes.  The iPhone 8 will start at £699 and the iPhone 8 Plus will cost an additional £100 and start at £799.  The iPhone 8 and 8 Plus have already been released as of the 22nd of September and the iPhone X is set for a release on the 3rd of November; which one won the battle of iPhone 8 vs iPhone X for you; which one will you be getting?

If you want to compare even more cheap mobile deals then click here to discover great deals on both of these phone and more on our mobile deal check website.